The Power of Visceral Strain Counterstrain: A Case Report 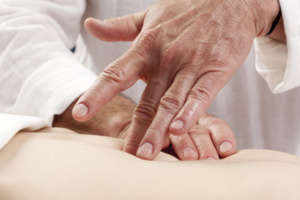 The Power of Visceral Strain Counterstrain: A Case Report

History: The patient is an obese left hand dominant 39 year old male with a history of GI dysfunction that had recently undergone a reversal of gastric bypass surgery three months previous. The patient reported that he had been unable to tolerate the implant over the past year and after imaging revealed improper placement of the device, his surgeon recommended removal/reversal. Immediately after that surgery, he was referred to me due to a recent R/C tear after experiencing left sided shoulder pain during Crossfit Training and had subsequently undergone a left R/C repair 8 weeks previous. Over the past several weeks, I had been treating my patient with a standard ROM, R/C protocol as well as Strain Counterstrain somatic releases for the spine, ribcage and extremities, which had been progressing to plan with the exception of some restriction and complaint of pain with behind the back reach and inability to tolerate an increased PRE program. However, the patient had finally revealed to me that his current primary problem had been “getting regular” after the gastric bypass surgery/reversal and he had been suffering with an inordinate amount of constipation and irregularity and was pretty miserable.

Treatment: I had just completed the Advanced Strain Counterstrain course for the Visceral System in April and had been having success with my back pain patients using many of the visceral releases and techniques. A cranial scan indicated some restriction on the left side at the location of the valve/sphincter body. With the patient’s permission and desire for help, and recalling our instructor saying that “the valve releases can be the most powerful in the shortest amount of time”, I decided to use a sequence of valve/sphincter releases for the visceral system. Encouraged by the results of the cranial scan and the patient’s GI history that seemed to dovetail nicely with the surgeries, I performed a release to the Gastroesophageal Junction on the left. I then performed a release of the Pylorus, the Duodenojejunal Junction, followed by the Ileocecal Valve. I also performed a release of the Sphincter of Oddi. The patient’s examination indicated tender points at all of these locations which were consistent with my observation and sequencing. After this session, the patient was able to perform an improved pain free BB reach though there was still some minimal ROM restriction versus the right shoulder. The patient also reported feeling generally better.

Results: Though our treatment session using primarily visceral releases seemed productive, there was no immediate observable significant or dramatic improvement. However, I was surprised and pleased that one week later the patient arrived for our next physical therapy session and his first words were “Wow, what happened last week?” I asked him what he meant and he reported that the rest of the day after our previous treatment session, he spent “a lot” of time in the bathroom “getting regular”. Furthermore, he was happy to report that after that eventful day, he had been consistently regular and that his shoulder felt better. Re-evaluation of the left shoulder revealed full and pain-free AROM throughout all planes as well as a ½ grade gain in strength of shoulder abduction and external rotation. Consequently, the patient could now tolerate lifting heavier weight, which has allowed progression of our R/C protocol.

Conclusion: I was quite pleased and simply amazed at the power of the visceral releases. What may have seemed like an unrelated problem to what I was actually treating; (i.e. constipation vs. R/ C repair and its associated stiffness and weakness) was actually profoundly affected by releasing the visceral system and undeniably helped my patient and his quality of life. My patient was also grateful and “relieved” that I had recently completed the visceral course and was able to help him. I am here to say that I will never underestimate the power of Strain Counterstrain and its ability to help our patients and our practice. I eagerly await my next Advanced Strain Counterstrain Course!

You have Successfully Subscribed!